This guide explains the basics of OER, and provides general and discipline-specific resources.

OER Map is a record of evidence about the global impact of open educational resources (OER).The purpose is to help people understand the impact of open educational resources (OER).  This site was developed and maintained by the OER Hub until 2015 as part of evidence gathering work funded by The Hewlett Foundation.  OER Impact Map archives some of the project findings and secondary research.

Here are more impact studies and reports that should provide more insights into OER usage and efficacy.

1. University of Oxford conducted a OER impact study from Nov 2010 to June 2011 and this report can be accessed here.

The OER Adoption Impact Explorer helps you understand some of the impacts of adopting OER instead of commercial textbooks. Click on the image below and start exploring ways to change the values below to match data from your course to see how OER adoption can benefit your students and institution. Charts, graphs, and language will update in real time as you make changes. 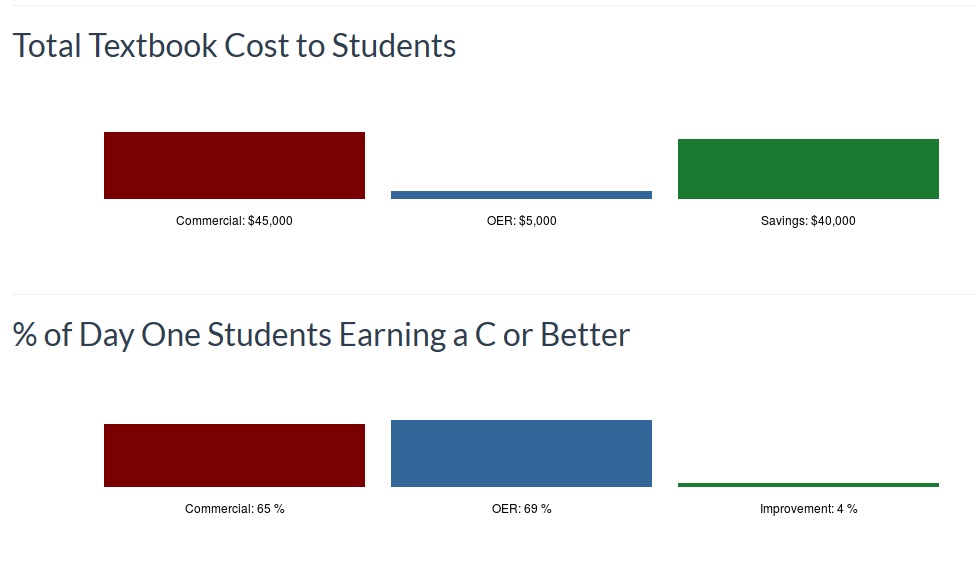 Here is another tool which helps us calculate the textbooks savings for students over period of time. Click on the image to take you directly to the textbook savings calculator. 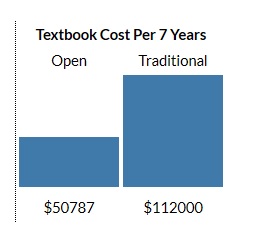 This is taken from Openedgroup.org. Openedgroup is an interdisciplinary group of people based at Brigham Young University who are working towards studying the impact of OER and OER adoption. This is the same group who developed the COUP Framework (Cost Outcomes Usage and Perceptions), OER Adoption Impact calculator and OER Adoption Research Toolkit. They also offer a free Intro to Open Education online asynchronous course, if you are interested in learning more please click here.

Here you will find various review projects on the impacts of OER adoption. This is taken from http://openedgroup.org/review

Studies that included data on both efficacy and perception

3. Gil et al. (2013) - surveyed students over a five year time, asking them to compare blogs that featured OER resources versus other blogs (all blogs were directly related to student coursework)

4. Ozdemir and Hendricks (2017) - examine over 51 e-portfolios written by faculty in the state of California about their use of open textbooks.

5. Hendricks, Reinsberg and Rieger (2017) - examine the use of OER in a physics course at the University of British Columbia. 143 students completed surveys about the OER; students reported using the open textbook with the same frequency as their traditional textbooks.

Studies that focused on efficacy

2. Bowen et al. (2012) - completed a rigorous study comparing the use of a traditional statistics textbook with Carnegie Mellon’s OLI at six different institutions.

5. Pawlyshyn et al. (2013) reported on the adoption of OER at Mercy College in New York. In the fall of 2012, 695 students utilized OER in Mercy’s basic math course, their pass rates were compared with those of the fall of 2011, in which no OER were utilized.

6. Robinson et al. (2014) examined the use of open science textbooks in three secondary science subjects across several schools in a suburban school district.

7. Fischer et al (2015) performed follow-up research on the second year of implementation at the schools studied by Robinson (2014).

8. Allen et. al (2015) designed an experiment in which an experimental class of 478 students used the OER ChemWiki as its primary textbook, while the control class of 448 utilized a commercial textbook.

you can read more studies on efficacy here http://openedgroup.org/review

Studies that focused on perceptions

3. In an extension of the previous study, Bliss et al. (2013b), studied OER adoption at eight different institutions of higher education.

4. Lindshield and Adhikari (2013) studied the perceptions of students who utilized a digital OER textbook in a Human Nutrition class.

All of these above mentioned studies are taken from http://openedgroup.org/review and there are more studies' links available from this website.

Responses from over 2,700 U.S. faculty paint both a "Good news" and a "Bad news" picture for the role of open educational resources (OER) in U.S. higher education. Both sides of the equation are clearly evident in the responses from higher education teaching faculty who had recently selected required curricula materials (primarily textbooks) their course. Learn more from this report - Click here to download the report.